the daily pencam
(*everything* is becoming more colorful & beautiful now!!)
It's turning out to be a very stressful week...my son (in Portland) has a lease that expires at the end of the month, and no place to move. He's underemployed...and everything in Portland seems very expensive. So, having more of the anxiety that parents have when their little chicks move out on their own. It's hard to gauge what's going on from a couple hours down the road...all I can do is try and guide him and offer some supportive words. Don't have the cash to bail him out as a co-signer on a new big lease...

Here's a mosaic of my newest leaf pictures. I am loving how the sky changes every morning -- sometimes the camera captures things that are so subtle I don't truly see them when I am walking.

I'm still looking at everyone's amazing entries, though my commenting has been hit or miss.

I've been spending more time outside and taking pictures. In a way I'm disappointed with the month, because I wanted to push myself to paint and do collage, things that are harder for me. Falling back to photography feels like a bit of a copout.

But on the other hand, I'm having so much fun taking pictures. It keeps my attention focused (sorry) on my surroundings and the moment. I'm going with what feels right.

One of the things I enjoy is looking for glimpses of the unusual, and in that vein, here are some mushrooms growing in a posthole: 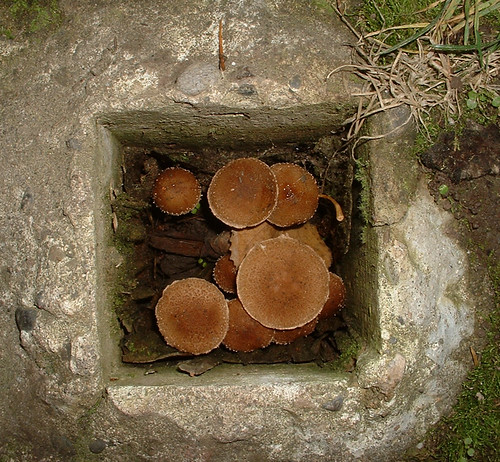 How do you work with a photo that you’re ambivalent about? Focus on what you LIKE and "get rid" of the rest! I liked the familial nature of this image - the idea that cycling can be a group activity rather than a nose to the grindstone, pumpin’ it out one (which way do you think MY family views this sport?!?). And of course a ‘poop’ addition is never amiss!

The embedded circle on the left (my tape dispenser "stamp" once again) wasn’t nearly visible enough for me so I stamped in a smaller circle with Antique Brown ink. I added in some more paint over the image and played with a wavey stamp to lift out some colour, adding to the texture. I then started adding in some Ebony Black for contrast. The image was so obviously added on, I thought I’d play up that fact by adding a thin black line around it, then connected it to the circle on the left. I didn’t want to get picky with centers of circles, so did an eraser print in the middle.

He does this often. But he looked so cool that I had to draw him. I could not go through this month without a drawing of my sleeping cat: I don't know if I'll do more today or not, but it's a good pencil drawing of Ari's exact sleeping pose. He moved of course before I finished, but not before I got the difficult parts and the exact shape of his head at that angle. He never stays still long enough for me to finish a drawing even if he's sound asleep.

i can't believe there's only one more week to go.

i actually finished this layout last night.
and i did another one after that (after midnight)
even though i'm not supposed to be using up the pictures i just printed out, i just can't help myself!
here's another one:
( Collapse ) From thoughts to sketch to finished product. I enjoy all the creative processes involved.

Dying wool with natural dyes. The red is madder. The white and black are courtesy of the sheep themselves.
Spinning yarn. All three colors of it.
Designing.
Weaving.
Beading.
Page Layout.
Journalling.

today's collage is actually my poet's birthday card! i actually finished it early this morning, so it counts! whew! it is symbolic and personal and he really loved it. it is the first of these collages that i actually finished with a backing, so now i am excited about doing the finish work after they are all made this month. no more art today though, as it was more important to eat Vietnamese food, make brownies and play cribbage tonight to celebrate! 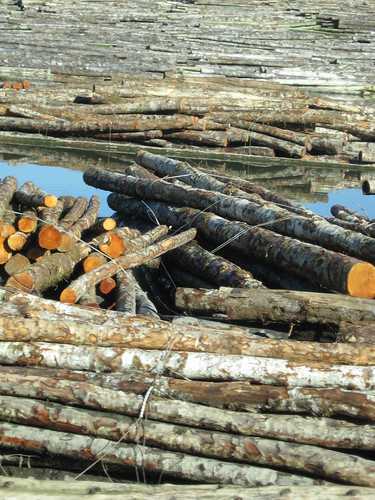 I went on a limo ride(contest at school) and took a bunch of pictures.... I have been doing art at school each day, but avoid the computer at home so haven't been sharing the past couple days.
more photos in my flickr